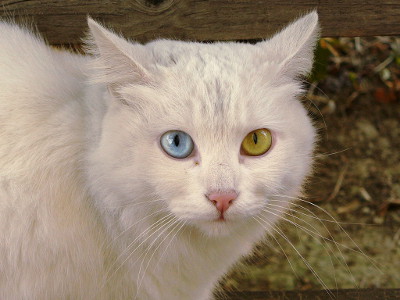 Kittens are born with their eyes closed. Only after they have lived several days, do their eyes open for the first time. Scientists discovered that if they put blindfolds on the kittens for the first three days their eyes are open, they will be blind for life. (I know, bad experiment!) Evidently this time is important in the training of their brains’ sight interpretation capability. The blindfolded kittens’ eyes work fine, but their brains don’t know what to do with the pictures! Newborn kittens who lived in white boxes painted with horizontal black stripes could never learn to recognize vertical things during their entire lives. And those raised among vertical stripes could not see horizontal things.

Cats’ eyes are specially developed to see horizontal things much better. In ordinary lighting their irises open as vertical slits. Because the slits are narrow, focus on the horizontal plane is easy to maintain, but their ability to focus on objects vertically is reduced due to the relatively large opening vertically. Their retinas, like human retinas, analyze the picture before it is sent to the brain. The brain doesn’t just get a dot by dot representation, but rather an interpreted story from the retina. In the human eye, the signals of light hitting the retina pass through nine layers of synapses, with each layer potentially filtering or interpreting, before they make it to the optic nerve.

One fact relating to this interpretation is that a cat will see movement much more clearly than the detail of a still scene, as will a human. For instance, if your cat is not paying attention to you, wave your hand a little bit, and the cat will instantly look your way. All this makes sense for a cat’s survival. Their food moves in the grass and they have to see it right away. But the motionless grass and the rocks are of no significance. Most of a cat’s food moves across the ground – horizontally. This is why a cat can easily chase a ball that rolls on a table, but looses it when the ball falls to the floor. Watch a cat stalk a bird. They get closer, and closer, then suddenly the bird flies up into the air. Often the cat doesn’t even look up. To the cat, the bird simply vanished.