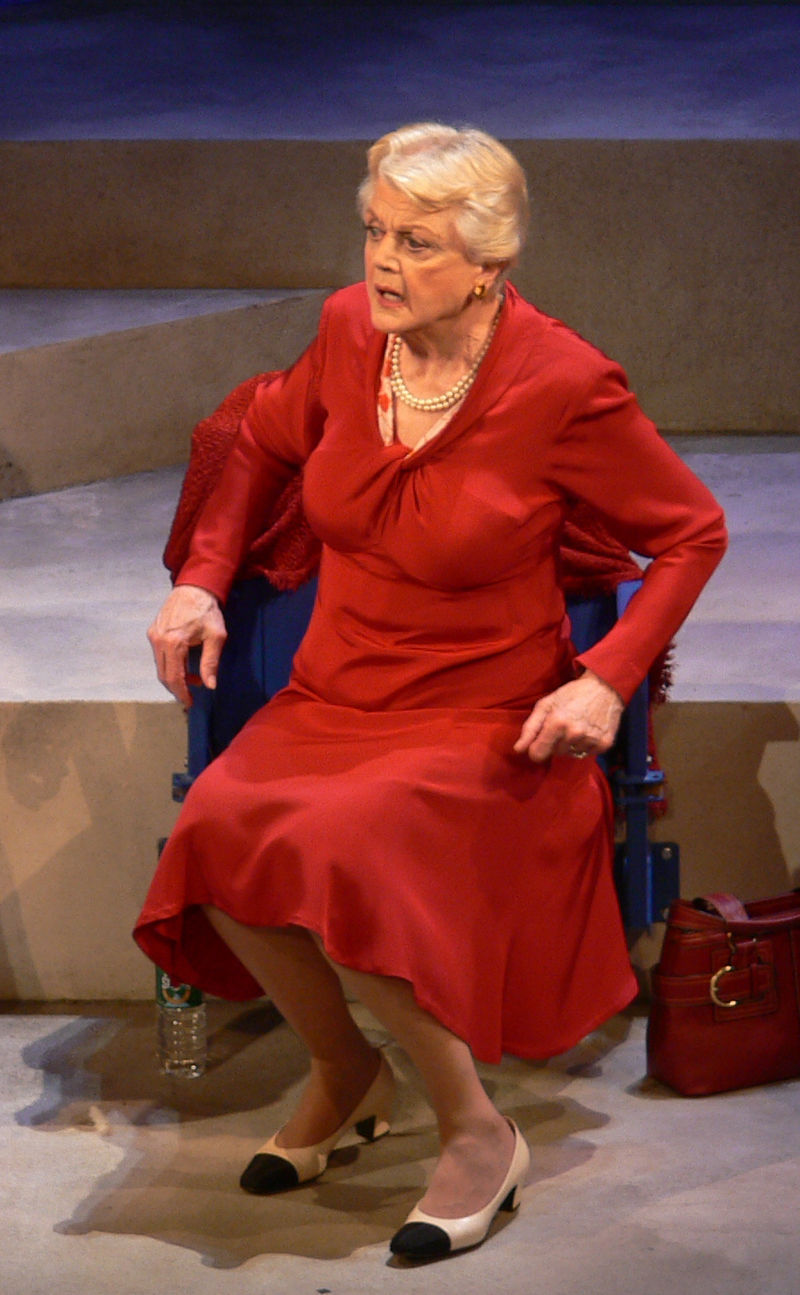 I’ve had an incredible relationship with my husband, with my family. I know they’ve had problems of their own, but we have never wavered in our closeness as a family. I’ve had a hell of a life.

I’m in a very enviable position, being able to work like this  45 years later. It’s always beginning! I never have a sense of finishing up, just new things beginning. When I die, they’re going to carry me off a stage.

Mystery is something that appeals to most everybody.

A small number of people have seen me on the stage. [Television] is a chance for me to play to a vast U.S. public, and I think that’s a chance you don’t pass up… I’m interested in reaching everybody. I don’t want to reach just the people who can pay forty-five or fifty dollars for a [theater] seat.

Providing I can put one foot in front of the other, I will continue to act.

I’m not going to be dancing with the stars at this stage in my life. But I want to dance and bop around, and I did, and I can

Here I am, I still go on, you know, like the tides.

I just stopped playing bitches on wheels and peoples’ mothers. I have only a few more years to kick up my heels!

It has been erroneously reported that I am a Republican! I am not a Republican. It’s all over the Internet and It’s bizarre. I’m a huge Obama fan. I’ve already voted for him by absentee ballot. I am Democrat from the ground up.

The theater is magical and addictive.

[on handling early success in her teens] I was a very serious teenager at that time and I considered the work to be the most important thing and I concentrated on that. I was a bit goody goody. I didn’t fool around at all, which is a bit of a shame, I think. I’ve missed on a lot of fun, but I’ve made up for it later.

I had surgery, and I put it off for a long time. I want to tell women: don’t put it off.

I found that people were helping me across the street. I had to pull myself up the stairs. I began to feel ancient, and I feel very young at heart.

Believe me, it jabs you. When you’re on the side of buses and New York loves you, you love to go out there every night. It’s like a race. Curtain opens, out you go, and New York is yours.

[On her formula for longevity] I rest, I take a nap, I don’t eat stupidly, I take care of the bod and that’s very, very important when you get to a certain age. I’m the bionic woman; I’ve got knees, hips, everything is new and that has made a tremendous difference to me; replacements are high on my list of goodies.

[On being given a British title] I’m joining a marvelous group of women I greatly admire like Judi Dench and Maggie Smith. It’s a lovely thing to be given that nod of approval by your own country and I really cherish it.

Actors are not made, they are born.

Work in the theatre just keeps revitalizing me, it keeps giving me the excitement and the fun of something new coming up and that’s a great gift.

We all have levels of performance.

[Regarding working until the end of life] My son said to me “Mom, honestly, the best thing for you would be to keep working and just go out on stage.” and I think that’s a good thing to aim for.

I really can’t honestly give any tips beyond hang on to your dream. Hang on to what you want, what you feel you want to achieve and go for it. We are all the victims of our own talent and our own shortcomings sometimes, and we have to be aware of those things because they will trip us up and stop us from achieving what our aims are.

I absolutely do not have a retirement age… I’m only 87 – which today is nothing. It’s just like 60 a few years back. I believe age should not stop you from keeping on.

Clint Eastwood is an extraordinary director because he knows the value of a buck. He knows where it will show on the screen.

I started in London, as a kid. My mother knew I had sort of an inbred talent. She was an actress, so I inherited it from her. But I think I got a lot of it from my grandfather, who was a great politician.

[on the first time working with a choir] I felt extremely nervous. I felt I was working with a group of people who are so wonderfully integrated among themselves to produce wonderful sound, music, singing – their voices are so pure, so clear. I’ve listened so much to them in the past to be singing down with them, I was very nervous.

A sitcom. I hate that word.

I don’t think about going back to the theater.

I have never directed. But I think I could. I have thought about it. I’m a bit long in the tooth to start.

I made about 56 movies, I think. Not that many.

I never regretted what I turned down.

I was put under contract. A major studio. I got nominated for an Academy Award. Isn’t that ridiculous? I mean, at the age of 18!

I’ve worked with the greatest actors, and they’re all gone. This is what’s so desperate to me.

The Manchurian Candidate was the most important movie I was in, let’s face it.

Angela Lansbury was an actress for more than 70 years.

Angela’s mother was Moyna Macgill, born Charlotte Lillian Mclldowie, an Irish stage and film actress. In addition to Angela, Moyna had two sons. Angela’s father was a wealthy lawyer in Belfast, Northern Ireland, and also happened to be the director of the Grand Opera House in Belfast. This early exposure started her interest in a theatrical career.

The McLLansbury home became an informal meeting place for actors, writers, directors, musicians and artists. Within that environment, Angela could hardly have chosen any other path.

When Angela was nine, her father died of stomach cancer.

In order to escape a tyrant of a second husband and the Blitz, an incessant bombing of England by Germany in the early days of World War II, Moyna took the two boys and Angela to the United States. Her half sister, Isolde, stayed in England with her new husband, Peter Ustinov.

Angela and her family actually traveled with 60 additional children. That’s because her mother, needing money, took on the job of shepherding the children on their ship, the Duchess of Athol. The children were escaping the dangers of war, while their parents had to remain in England.

The Duchess of Athol

Angela came to New York City and was sponsored by a wealthy Wall Street business man, Charles T. Smith. She lived with his family, but she didn’t stay long. Her mother had found work with a touring theater company in Canada and got Angela a job singing Noel Coward songs in a night club, paying $60 per week. This was good money at the time, especially since Angela was still just 16 years old.

Around a year later, her mother decided to move to Los Angeles, hoping to find work in the film industry again. Angela came along. At this point neither of them had much money, so they took jobs during the Christmas season in a department store. Before long, her mother was fired, so the whole family, Moyna, Angela, Bruce and Edgar had to survive on Angela’s $28 weekly paycheck.

It was then, at age 17, that Angela caught her first real break. According to a Wikipedia article, at a party her mother hosted, she met John van Druten, who co-authored the movie Gaslight. She was auditioned, and was signed to a seven-year contract with MGM paying $500 per week.

Angela’s first marriage was to the actor Richard Cromwell around 1944. She was 19 at the time. He was 16 years older at 35. That marriage lasted less than a year.

According to IMDb.com, “A recent authorized biography, ‘Balancing Act’, states that her first husband, Richard Cromwell was gay, a fact she didn’t know until after their separation.”

Her second marriage, to actor/producer Peter Shaw in 1949, who was only seven years older, lasted 54 years until his death of heart failure in 2003.

Angela came to fame starring in the Broadway play Mame.

Angela was particularly fond of Murder, She Wrote, because unlike almost all detective dramas on television, it did not show much actual violence.

Another oddity about Murder, She Wrote is that it was the first television show starring a middle-aged woman. Until then, almost all of television was aimed at a younger audience.

When Angela was around 50, her mother died of throat cancer.

Both of Angela’s children became involved in heavy drugs. It appears that Deirdre never became addicted, but Anthony became hooked on cocaine and heroin. Fortunately, he was able to successfully quit using drugs in 1971. Angela broke him away from his contacts by involving him in a production project in Ireland.

Angela with her children Anthony and Deidre

Angela was nominated for an Emmy award 18 times, but never won.

MGM thought it would be a good idea for her to change her name to “Angela Marlowe.” Evidently she didn’t agree.

Due to arthritis, Angela has had a hip and a knee replaced.

Technically, Angela is Dame Angela Lansbury, having been awarded the CBE (Commander of the Order of the British Empire) in 1994 for her services to drama.

According to another report, she was awarded the DBE (Dame Commander of the British Empire) in 2014.

Angela’s brother, Bruce Lansbury, was a television producer with many episodes of The Wild Wild West, Mission:Impossible, Wonder Woman,and Knight Rider to his credit. He was also affiliated with The Brady Bunch and Happy Days. Most notably, he was the producer of Murder, She Wrote, starring his sister, Angela.

Her other brother, Edgar, who is Bruce’s twin, was a producer of English television, film and theater, and also some Broadway plays.

After starring in Murder, She Wrote for eight seasons, she purchased the show, becoming the executive producer for the remaining four years. It’s twelve-year run made it one of the longest running detective drama series in television history.

In addition to acting and singing, Angela is also an accomplished pianist.

In 2014, at the age of 88, she has been appearing as Madame Arcati in Blithe Spirit in London’s West End, England’s equivalent of America’s Broadway.

It has also been reported that in 2014, Angela still enjoys gardening.