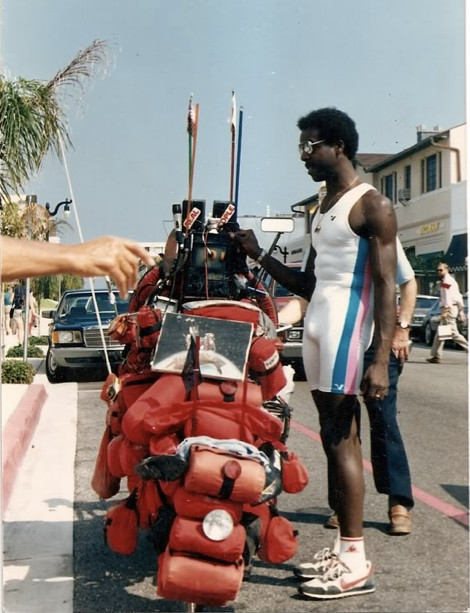 You may occasionally hear someone refer to doing something oddly, or backward, as “Wrong Way Wooten.”
This has become an expression almost entirely detached from its roots. Something like, “Who is John Galt?” That came from the classic novel, Atlas Shrugged, by Ayn Rand. But what about “Wrong Way Wooten?” What’s that all about?

In approximately 1955, Tom Wooten was born in Bryn Mawr, Pennsylavnia.

This place with the weird spelling (pronounced “brin mar”) is approximately eleven miles outside of Philadelphia. Bryn Mawr means “Big Hill” in Welsh. This is a little town of approximately 4,000 people with a neat little downtown where most of the buildings, and most homes, are made of red or orange brick. Bryn Mawr is known as one of the wealthiest areas in the United States, and that figures into our story later on. Ten percent of the population is black, ten percent Asian, and the rest mixed or white. Tom grew into a tall, slim, very dark skinned, strong, good-looking man. For a short while in the 1980s, he was slightly world-famous. He did not attain the level of celebrity such as Paul McCartney, Dolly Parton, or Burt Reynolds, but he did become a legend, and I think you’ll agree that what he did was significant.

So what did he do? He rode a bicycle backward. That’s all. But he leveraged that skill to deliver a message, and he did it well.

It started when Tom was thirteen years old. In a discussion with a friend, the idea of riding a bike while sitting on the handlebar came up. The friend said it couldn’t be done. Tom proved otherwise.

Through his high school and college years, he perfected this skill, and was occasionally seen riding his bike backward through the town.

There is no information about where he went to college. In fact like much of the information about Tom Wooten, well, there just isn’t much information. One thing we know for sure is that it wasn’t Bryn Mawr college, since that’s an all-woman’s college.

Initially, he rode an ordinary ten-speed bike of the era. with the only modifications being padded tape on the handlebar, to make sitting on it more comfortable, and mirrors on long brackets so he could see where he was going.

When he saw the way people reacted to seeing him ride that way, he decided it would be his career someday.

In his late 20s, evidently after driving a tow truck for a while, and receiving a degree in psychology, he planned his first cross-country tour. Originally, he was going to ride with five other people, but they all backed out before he started. He relates, “I learned never to count on anybody for anything.”

he built a custom bike for his purpose. It was based on a Schwinn Varsity, which was a heavy all-steel ten-speed road bike of the late 1970s, with a one-piece crank. 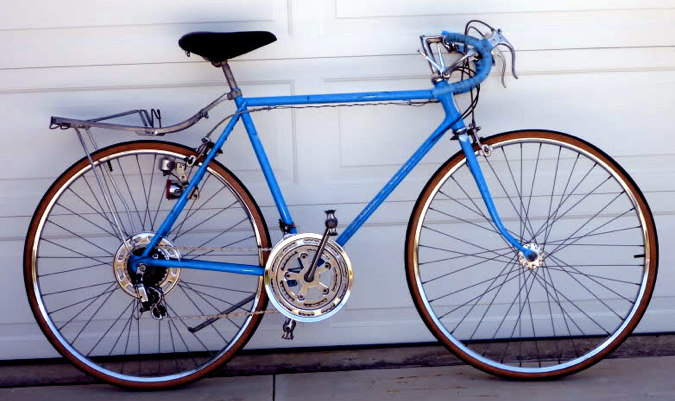 In addition to padding the handlebar and adding mirrors, he removed the seat, and put a portable television in its place. He then somehow attached another ten-speed bike to the rear of his bike in order to carry more gear. There is no information as to exactly how the second bike was attached. There are conflicting reports as to how much the entire contraption weighed. The report that I believe says it was 160 lbs (72 kg). Other reports put it at “over 300 pounds” and some say it was 450 lbs.

Wrong Way converted the bike to 21 speeds, quite rare in the 1980s, but left the shifters in their original position – on the handlebar stem. This meant that he had to reach between his legs to change gears. 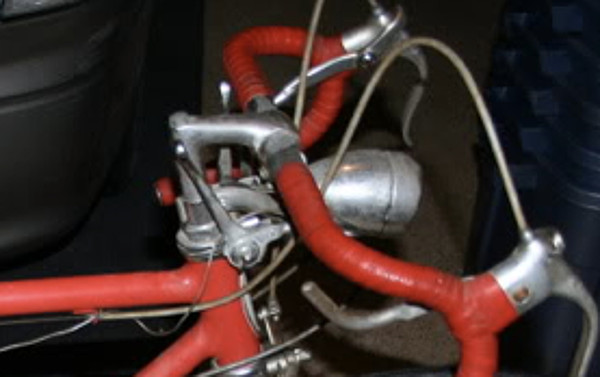 Stem shifters on a Schwinn Varsity

His bike had toe-clips, which were, of course, installed backward on the pedals. 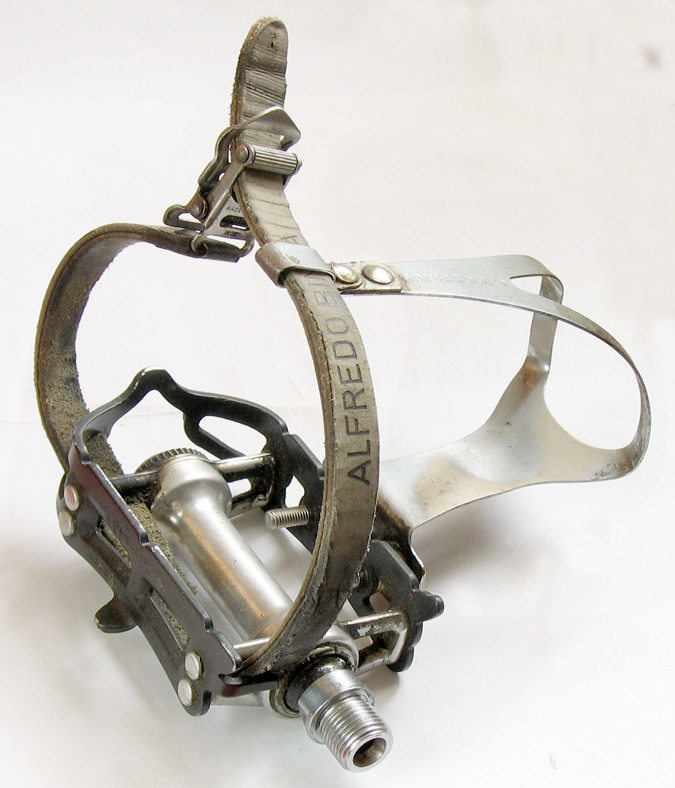 Before his first trip to traverse the entire United States, he studied maps. Being independently wealthy (according to what little is written – and we don’t know how he attained that wealth, but Bryn Mawr is known for its wealthy residents), he then hired a small airplane to fly low, examining his proposed route for overly steep hills, road construction and other such potential problems.

Wrong Way then set out on his journey with a specific self-appointed mission. He represented several major charities including The American Cancer Society, The American Lung Society, The Heart Fund, the Jaycees, United Way, and March of Dimes, taking donations in person and also encouraging people to donate directly to their favorite charities.

According to the legend, he criss-crossed the country several times totaling 28,000 miles (45,000 kilometers) over the next seventeen years. As he tirelessly explained to thousands of people across the country, “The main reason I do what I do is to get people to realize that they have a responsibility to other people.” When he could, he would ride more than 100 miles in a day, but on many days he couldn’t get that far. This was due to interruptions as fascinated people wanted to talk with him. He was fine with that.

To some, it looked like what he was doing, riding around the country on a bike, would be limitless fun, but he cited some problems, such as flat tires, bad weather and racists who sometimes tried to run him off the road. “I can’t hate them, then I would be just like them.”

Someone once asked what he does when he gets a flat tire. With a straight face he answered, “I set the bike on fire.”

He did not recommend that other people should tour backwards. “One mistake, and you’re history.”

As with all good legends, the stories sometimes exceed the truth. One person remembers that Wrong Way was an expert on the subject of girls. He was supposedly a remarkable cook and a karate expert. That may be true. At least one person says Wrong Way was able to read minds, responding to unvoiced questions. All say he was a brilliant conversationist, able to speak on any level from ghetto talk to erudite conversations with professors.

He has been spoken of as a loner, and in a way, I suppose he was. This was a one-man crusade, and it must have been hard for him to have permanent, deep friendships, since he was always on the move. There is an unverified story that he had a son, who he pretty much entirely neglected. It is reported that this boy had a hard time in school, being an angry, disruptive student.

With the public, he was evidently quite gregarious. On his bike he also carried a sound system, and on more than one occasion he could be seen riding backward, accompanied by blaring music – anything from opera to rock, and sometimes happily singing along.

He planned on riding for twenty-five years. Unfortunately, in 2004, at age 47, he died of a massive heart attack.

His credo was, “Bind yourself to nothing and seek harmony with all things. Only then can you be truly free.” People who remember him say he was a wonderful and very personable ambassador for kindness to others.

I hope you enjoyed this little book! You can discover more like and unlike this, at FreeSpeedReads.com. – Jeff